The James Beard Foundation, proprietor of one of the country’s most prestigious culinary awards programs, can elevate a chef or restaurant to new heights. Something perhaps not familiar to those outside of the industry, is that just before it names winners for chefs or restaurants, it honors a variety of media professionals. Oklahoma State University Clinical Assistant Professor Anna Zeide made the prestigious list with her first book, “Canned: The Rise and Fall of Consumer Confidence in the American Food Industry.”

Her book, published by University of California Press in March 2018, won the Beard Award for Reference, History and Scholarship. In it, Zeide examines the history of American consumers’ relationship with packaged foods.

“Today, we eat in a way where much of our food comes packaged in bags and boxes and cans and things we don’t know how they’re produced; we often don’t know what’s inside, we have a kind of inherited trust. What drove the research was, how did that come to be? How did consumers grapple with this very new form of eating at a time when it was new, before it wasn’t so accepted? And the business side, how did the canners and the canning industry build that trust? What did they do to convince the consumer standing in the general store, the first time they saw a can of food and make them want to come home with it? What was going on behind the scenes – the kinds of broader networks that canners built with scientists – and the media and politicians and federal government regulations to make consumers accept this food. How did that acceptance of just canned food initially pave the way for a broader acceptance of Americans of all kinds of processed foods? And, what can we learn from that, what does it tell us about our food system today; and for anyone who’s interested in changing the food system, how might we look from history and understand the origin stories.” 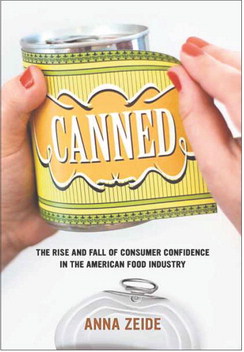 Continued from Page A1

The United States went through a national scare with romaine lettuce beginning in the fall of 2018, leading to prepackaged lettuce being pulled some store shelves. That was too recent for Zeide’s book, but she has similar examples that illustrate waning consumer confidence.

“A more accurate title would be The Rise and Fall and Rise and Fall and Rise and Fall … There’s been a number of different phases especially over the course of the 20th Century, that I write about in the book, there’s been a lowering or decrease in concern among consumers of packaged foods, starting with an outbreak of botulism in canned olives that I write about in 1919 and 1920 and how people died from eating it and how that led to the industry’s response. The ‘60s and ‘70s saw another kind of downswing as the food industry got swept up in broader critiques of environmentalism and consumer interests,” Zeide said. “I would argue now, in the 21st Century we’re kind of in another, I wouldn’t call it a fall because the food industry is still very strong and powerful, but I definitely think there’s a moment of questioning among some sectors of consumers about how the food industry operates, how federal subsidies for agriculture do and don’t shape food systems that provide for human health; as well and environmental health, the impacts of our food production system on climate change and other environmental factors, on why we have a rising obesity epidemic and how the food industry is sort of part of that as well as a resurging interest in local food and organic food and alternative ways of eating … all of theses kinds of moves in the cultural and business sector in the United States suggests a reconsidering of consumers on where their food comes from and what kind of say they have in it.”

While Zeide’s book is a scholarly work, she said it’s being used in five or six university classrooms, her hopes is that it can be accessible to the casual reader as well. The award certainly has the potential to increase its popularity.

“I’ve gotten feedback from people who are not academics who have read the book and enjoyed it, I think especially for the framing, I tried to rewrite the introduction and the conclusion and opening parts of the chapters and really tried to keep an eye toward trying to make it more readable and accessible,” she said. “It’s sort of an interesting award, in that, for some people who are in the food world and especially in bigger cities it means a lot, and people know about it and wait for the results every year. In other places, people have never heard of it. It sort of, depending on the audience, does or doesn’t mean anything, but among my colleagues … it is whenever something has a kind of national and international presence like this foundation does it feels exiting that Stillwater gets to be a part of it. In particularly for me, it’s exciting that’s there is recognition for academic work on food history. The foundation tends to look more toward public-directed forms of food-writing, the fact that an academic book … that kind of writing can also transcend those boundaries and get noticed is exciting.”

Zeide, along with Bailey Norwood, founded the Food Studies program at OSU, a multidisciplinary group that collaborates on solutions-based research or actions for food problems. The book Zeide is currently working on has to do with the history of food waste in America and globally. Buoyed by the success of “Canned,” Zeide is writing the next book with a broader audience in mind. “Having the award, it just helps makes a broader audience for why what I’m saying why this stuff is important and hopefully helps me write in a more accessible way. it’s exciting that there are broader organizations bringing attention to this kind of scholarship and it’s very motivating to me and other scholars, as well.”

Click here to see this page in the eEdition: